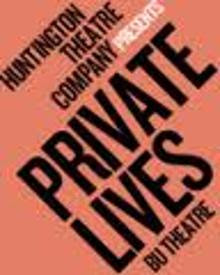 The Huntington Theatre brings so many interesting pieces to their stage and has had a very strong track record in their theatrical endeavors.  Playwright and songwriter Noel Coward's "Private Lives" recently opened and there was plenty of buzz surrounding it that it was evident that this one was going to be a lot of fun.

"Private Lives" tells the story of divorcés Amanda and Elyot, having divorced each other five years early, starting fresh with their new respective spouses, Victor and Sybl, on their honeymoons.  By unfortunate chance, they both end up running into each other as they both are staying at the same place.   However, unexpectedly, they soon find themselves still harboring feelings for one another and their spark is once again reignited.

Coward's play is made up of three acts, but the structure feels like a miniseries in some ways. In the sense of how it was presented, it could be very well adapted into a TV show, as we are constantly given the typical "cliffhanger" after each act.  Granted, the first act could have been a standalone show because of how much was developed in a short amount of time.  The second act felt unnecessary, as it might have filled in gaps, but instead, it drew certain things out way too long. Very little was developed and watching the third act, it was a wonder why it was not shortened a bit.  All three could have been edited down to a two-act show.  However, despite its length, there was a great deal of clever wit and sharp dialogue within the piece.  Combined with the clever timing and energy of the performances, the words flourished. It was quite the riot.

Across the board, each actor gave a great performance.  Seeing Bianco Amato's Amanda and James Waterston's Elyot play off each was a lot of fun to watch, as their chemistry fired away like pistons.  They were in sync and not only worked well with one another, but their individual performances were strong and extremely, joyously energetic. Biano's Amanda was hilariously sassy and poised, giving a fiery performance. Waterston's wiry movements and reactions mixed with his wonderful comedic timing was quite enjoyable. The show was quite the marathon and those two never let up for a second. Their humorous presences helped carry the piece.  Far from being just the spouses, Autumn Hurlbert's Sybl was sweet yet sharp in her performance, and Jeremy Webb's Victor was confident and firm, always the protector. It was a great bonus to see those two play off each other as they got their moments to shine together.  Though she was only on stage for a few minutes, Paula Plum's servant Louise stole some scenes with her overly ridiculous French attitude and constant sneezing. It was very fun.  Everyone gave strong performances as expected and all contributed to develop fantastic moments.

Maria Aitken's direction was simple, yet she gave us nice scene pictures throughout the show.  Much of the time, there were several silent moments in the play that were sprinkled throughout ended up being quite hilarious.  The choices that were made during said moments were clever and fun, never becoming awkward.  There were also intricate physical and emotional distances that were created on stage, giving a bold statement on the relationship of Amanda and Elyot. It was very strong.

The set design was beautiful. Allen Moyer's design was not only meticulous and extremely detailed in presentation, but it also transported the audience back in time, drawing all of us in. Philip S. Rosenberg's lighting design deserves a great deal of praise as well, as his beautifully creates the afterglow of the evening and early morning sunshine. The colors were simple, but they were perfect choices for setting the moods of each scene. Tech wise, everything came together well and never upstaged each other. They worked in tandem. Overall, everything in presentation was very classy.

Despite being lengthy in some parts, The Huntington's production of "Private Lives" hits it out of the park. The performances, direction and production value were all fantastic across the board. Witty and fun, its a true testament that certain things in life are full of unexpected chances and unusual consequences, and this production has it in spades. This show will most certainly leave you laughing and smiling. This is definitely a show to check out.