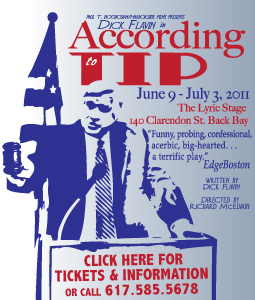 According To Tip
Again, one the most rewarding things about doing this blog is of course is able to see so many interesting productions in the city of Boston. I've talked about it before, but I think I find myself in a state of constant euphoria when I am about to attend a play or musical in and around Boston.
This was again the case when I went to go check out According to Tip, a one man show about the late and great Speaker of the House, Thomas "Tip" O'Neill. Truth be told, I discovered a few days before I was actually on the schedule to usher the show. I put on my blacks and headed downtown.

Produced by local film group, Harborside Films, According to Tip explores a local Cambridge man, Thomas O'Neill, who found his way through the trials and tribulations of local politics to the great House of Representatives in Washington DC. The show is a one person show, set between Tip's local office and his office in DC. We see his journey all through the elegant means of storytelling from his humble beginnings to the giant arena of the House of Representatives during the 60s, 70s and 80s. We get a chance to see the life and times told by the man himself.

Played subtly and simply by Dick Flavin, Tip's depiction is a kind man, full of spritely humor and has a knack for bringing you into his stories. Dick Flavin, a local radio personality, was very close with O'Neill and it made sense that he would be the one depicting him. There were some moments, in which Flavin would do a little jig or sing a bit to a piano track and would be a bit off, but that was mostly a sound issue. This particular device was used to break up much of the show. There was one adorable moment where Flavin as Tip sang a song to his wife and pantomimed a dance with her, reliving his wedding day with her. It was particularly cute to watch and it really showed us what kind of man Tip was. He commits fully to the role, and weaves his stories beautifully. Not being a politically minded person myself, I found it hard to follow some of the stories, but the script was written in a way that it not only did its best to describe the events and stories simply, but it managed to hit home with the born and bred audience. We hear his tales of his friendships and working relationships with the past great presidents, including Ford, Carter and Regan. He opens the show with a one-sided phone conversation with Ronald Regan and his establishing relationship, though are meant to imagine the other side of the talk, is believable. We see and believe that Tip’s friendship with Regan is real and genuine. Its Tip's story and Flavin takes us through his life, his events and his regrets. You see the genuine feeling in Flavin as Tip, especially since he knew him so well.  He interacts with the audience as well beautifully, really solidifying his relationship with us. He doesn’t speak at us but to us. It’s that connection that helps contribute to a strong experience. He was just a man, who like all of us, lived his life and did what he loved. It was that part of this show that I immediately identified with and appreciated.

The set is again, Tip's Washington DC office and his local Massachusetts office. Each office is dressed nicely, with keepsakes and collectibles from Tip's life. Giving us a sense of the time period as well, we are given a look into where he worked. With photographs and props, everything compliments the set fairly well. There also was a podium that was set up for Tip to show us various moments where he would be speaking up in a town hall or at another political event. Each moment is a bit of his history and a chance for some relive those times. I appreciated the attention to detail in the set design, especially because we were transported into his world.  It was put together not as an afterthought, but as a believable place where this man could have been working, knowing his personality and what kind of man he was. At times it was difficult for one side of the theatre to see what was going on, as the space worked against the show. Being only one person in it, Flavin had to play as much as he could to everyone else, though there was room to it do it a bit more.

As this play is again about the life of a political individual before my time, I found a lot of it hard to grasp some of events that he mentioned during his time. However, as I mentioned before, it was the fact that it was his story and we were drawn in as an audience. Thomas "Tip" O'Neill lived his life and chose his path to fight for what he believed in and to give voice to those that couldn't be heard. According to Tip is a well put together theatrical production that highlights the stories of a great man who was really there in the trenches, fighting the good fight. It reminds us that everyone has a story to tell, big or small, but like all great stories, it should one that cannot be forgotten. A great man who was just like us brings us into his world so we can truly understand where we were and where we are going.
Posted by Christian "The Card" Hegg at 10:04 AM No comments: