Aching and Dreaming to be More: Next Door Theater Presents: Sunset Boulevard 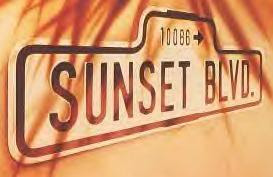 
Andrew Lloyd Webber strikes again with a massive musical, this time taking on Hollywood during the 40s and 50s. Based on the film "Sunset Boulevard", the story focuses Norma Desmond, a faded star of the silent film era living in her decaying mansion where in Hollywood, "talkies" are gaining traction. She accidentally crosses paths with Joe Gillis, a young screenwriter whose career is nearly on the rocks as well. She seizes an opportunity to use him to bring her screenplay based on the story of Salome to the screen, marking her great return. Along the way, twists, turns, tragedy and of course, unexpected events result in this culmination of colliding characters. Next Door presented their production on a much smaller scale, when the show usually is done in a larger capacity.  It would be interesting and worthwhile to see a new and ambitious choice.

Webber's score is a memorable one, and with many of his shows, most of it is sung through with very little dialogue.  It has strong notes throughout and still maintains a seedy and complicated view into this world.  However, as it is sung through, many of the lines sung could have easily been spoken. The lines that were spoken were far and few in between, therefore the strong difference was noticeable.  Though noticing the potential of the massive scale of the music, as it seems in this production, a larger orchestra and an especially larger space could have been better. The story and music ached for a larger outing. As for the story itself, despite its presence in the space, is tragic, terrifying, chock full of plot twist and unexpectedly beautiful.

The show is presented in a smaller space that took away from the overall feel of the show sometimes.  The grandeur of Hollywood was begging to come out.  The show didn't necessarily work for the space, but a strong effort was made, which was commendable. James Tallach's direction was a tad on the muddled side.  Granted, he used the space as best as he could, but keeping the actors at bay and not allowing them to explore the space as much as they could weakened the production.  The quintessential "park and bark" technique was used constantly, perhaps too much, causing the some performances to fall short.   Even the musical direction could have been stronger. Aside from the lack of real meat behind the orchestra pit, severe sound issues plagued the production.  Again, the size space and lack of grandeur contributed of the majority of issues.

The performances in the show were somewhat uneven.  Kevin Cirone's Joe Gillis, the screenwriter thrown into Shana Dirik's Norma Desmond's world, acted and sung the part well enough, but did not have the charisma to carry his arc as the character.  He did not have the qualities of the leading man and lacked the muddled and subconscious desperation that plagued Joe.  Shonna Cirone's Betty had the pipes to carry the role, but whether it be due to poor writing on the book's part, she was by no means as engaging as she could be. Moments between her and Joe lacked real chemistry and when they performed "Too Much in Love to Care", they appeared to be incredibly disinterested in each other.  They did have cute moments earlier in the show with "Girl Meets Boy", but their eventual union was disappointing. The ensemble did not bring nearly as much as they could to the production. Individually, none of them necessarily stood out, but as a whole they all seemed like they were going through the motions. However, when the men performed "The Lady's Paying" they were having fun with it and really showed off a great combined talent. The women also go to show off in "Eternal Youth Is Worth a Little Suffering", they all carried the number together incredibly well. The winners of the evening were Shana Dirik's Norma and Pete Adams' Max. Shana gives an astounding performance as the fading starlet, giving true moments as "tragically beautiful".  She not only channeled the grandeur of the character, but sang everything beautifully, especially during "New Ways to Dream".  Adams carries his role equally well, with subtle love and dedication to his Norma.  His moment with "The Greatest Star of All" is heartbreaking and wonderful at the same time. They each carried the show strongly.

Technically, the show had a nice feel. Brian Milauskas' design gave a great sense of the degradation and lost relic feel that mirrored Norma's current state.  However, some tinges of the old days of Hollywood, i.e. bits of Art Deco could have been splashed in.  However, the look worked in the space.  Even the lighting design was strong, with great colors and tones that gave a nice look to the overall production.  One issue was the use of strobe light.  The thought to use it for transitional pieces to emulate an old projector was a good one, but it did not necessarily work.  It was distracting and felt more like a party than a theatrical production. The costumes were quite impressive, though specifically Norma seemed that she received the bulk of the attention. Her impressive gowns and furs were the centerpiece, but as she is the star, it makes sense to have her appear that grand.

Lacking the potential size and feel of what the show could be really effected this particular production.  Choosing such a naturally large and grand show for a smaller space was a questionable choice.  Granted, it was a strong and incredibly ambitious choice for Next Door to make, which they deserve full marks for. But again, a handful of great performances and uneven moments make this a weak and somewhat disappointing version of the show.

Posted by Christian "The Card" Hegg at 11:19 AM No comments: